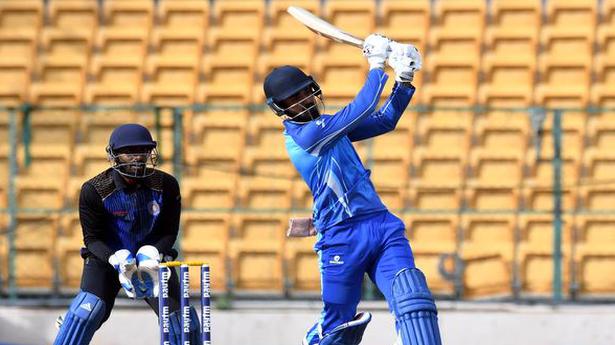 Karnataka made short work of Pondicherry in their Vijay Hazare Trophy quarterfinal, cruising to an eight-wicket win at the M. Chinnaswamy Stadium here on Sunday.

Rahul started nervously, nearly edging one from Vinay Kumar onto his stumps. Rahul struggled through the early blues, before opening up with some crisp drives. However, his exciting knock ended when an attempted sweep off left-arm spinner Sagar Udeshi went awry.

Padikkal, meanwhile, was in great nick. The stylish left-hander got into the groove with flowing front-foot cover drives, and delighted with the unorthodox one-legged ‘Nataraja’ pulls.

But, Padikkal gave his wicket away, cutting a short ball from Sagar to Paras Dogra at point. The 98-run opening stand put Karnataka in the driver’s seat.

Earlier, a top-order collapse pushed Pondicherry into a deep hole.

Opener Arun Karthik was sent back in the second over, castled by pacer Prasidh Krishna, bringing Vinay in. The former Karnataka captain took on the pinch-hitter role, but his wild heaves completely missed the mark.

A frustrated Vinay soon skied a length ball from A. Mithun — formerly his trusted new-ball partner — to square-leg, where Shreyas Gopal completed a good catch.

Much depended on Paras Dogra, but when the experienced batsman was prised out by spinner Praveen Dubey, Pondicherry was looking down the barrel at 41 for six.

The late-order contributions pushed Pondicherry past the 200 mark, but it wasn’t enough to stop Karnataka from sealing a semifinal berth. Prasidh, meanwhile, suffered a side strain and bowled only two overs.

arnataka sprang a surprise by dropping regular wicketkeeper B.R. Sharath. Rahul kept wickets instead, and gave a good account of himself with three good catches.

The winner of the Mumbai-Chhattisgarh last-eight clash will take on Karnataka in the semifinal.

Four-time champion Australia used its rich big-match experience to surpass a spirited South Africa by five runs in a rain-hit semifinal here on Thursday, setting up a title clash against first-timer India. This is Australia’s sixth successive final out of the seven editions held so far. There were fears that the second semifinal between Australia […]

India is in with a definite chance at the World Cup, says Srikkanth

Krishnamachari Srikkanth knows a thing or two about the ICC World Cup. After all, the belligerent opener — with 38 priceless runs taking on a lethal four-pronged West Indian pace attack on a green pitch with seam movement and bounce — was the top-scorer in the 1983 World Cup final. Kapil’s Devils stunned the formidable […]

Mithali Raj will lead the India women’s team in the ODI series at home against South Africa, the BCCI announced. Harmanpreet Kaur will lead Indian T20 squad for the first three matches in the six-match series. The team was named by the All-India Women’s Selection Committee, after a meeting at the Cricket Centre.  Harmanpreet will […]