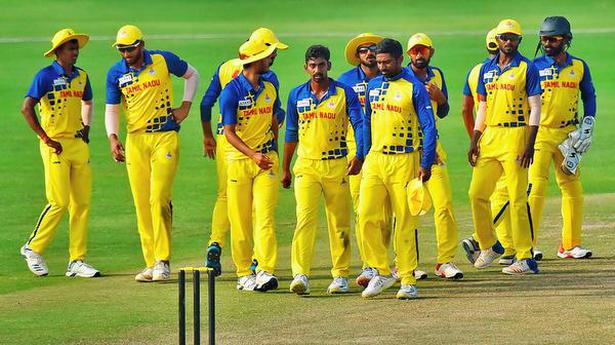 A memorable campaign in the Vijay Hazare Trophy for Tamil Nadu — the side won all its nine matches in the league phase — ended on a disappointing note for Dinesh Karthik’s men in the final. Host Karnataka romped home in Bengaluru.

Despite making all the right moves until that point, did Tamil Nadu get its strategy wrong in the summit clash? Under a cloud cover was it prudent for Tamil Nadu, defending a modest 252, to open its bowling with two off-spinners when the conditions screamed for seamers.

Karnataka was off to a flier.

And with rain in the air, shouldn’t Tamil Nadu have slowed down the game having its seamers on so that when the rain came down, the contest would not have progressed beyond the cut-off point of 20 overs and both sides would have been adjudged joint-winners?

In the event, spinners sent down as many as 13 of the first 20 overs — the overs ended quickly. And the side’s trump card, R. Ashwin, bowled only two overs. By the time rain ended the contest after 23 overs, Karnataka was ahead on required run-rate.

Spin is the strength

Talking to The Hindu, the chairman of the State selection panel M. Senthilnathan defended Tamil Nadu’s tactics. “We have had considerable success with spinners bowling upfront in the other games. Our strength is spin. It is not as if we have pacemen bowling at 140 kmph. We have our limitations with pace. That is why Dinesh [Karthik] began with spin. And Washington [Sundar] got a wicket too.”

Dwelling on Ashwin bowling only two overs, Senthilnathan said, “It is hard to predict when the rain will arrive. Perhaps, Dinesh would have wanted Ashwin to bowl in the later stages of the innings.”

Senthil observed the run out of B. Aparajith for 66 — at 178 for three in the 38th over — was the turning point. “After that we slumped and lost momentum.”

Talking about Karthik, Senthil said, “He’s the best we have to lead, has the experience and is respected by all. This has been a good tournament for us. Aparajith batted well, so did Abhinav [Mukund]. Washington showed his allround process and Shahrukh was a revelation with his hitting. In all it was a team effort.”

Tamil Nadu coach D. Vasu said, “The toss was vital. The pitch was damp and we had to bat on it in the morning.”

Despite the setback at the final hurdle, there were plenty of positives for Tamil Nadu in the season-opening competition.

England beat South Africa by two wickets in the third and final ODI at the Wanderers Stadium on Sunday. England leg-spinner Adil Rashid took three wickets in his 100th ODI as South Africa was restricted to 256 for seven. Rashid’s wickets included that of Temba Bavuma and South Africa captain Quinton de Kock, who made […]

Ganguly, Harbhajan bat for Dravid after BCCI’s conflict of interest notice to him

“God help Indian cricket,” said Sourav Ganguly, expressing his displeasure after Rahul Dravid was issued a notice from the BCCI’s ethics officer on conflict of interest allegations against the legend. Ganguly was backed by off-spinner Harbhajan Singh, who excelled under his captaincy. The BCCI ethics officer, Justice (Retd) DK Jain, issued the notice to Dravid […]

Duleep Trophy | Karun helps himself to a big century

India Red batsman Karun Nair underlined his class with an unbeaten 166, in a drawn Duleep Trophy outing against India Blue at Alur (1) ground here on Monday. The chanceless knock helped Karun erase the heartbreak of being dismissed for 99 in the first essay. The 27-year-old reached his century in style, stepping out to […]