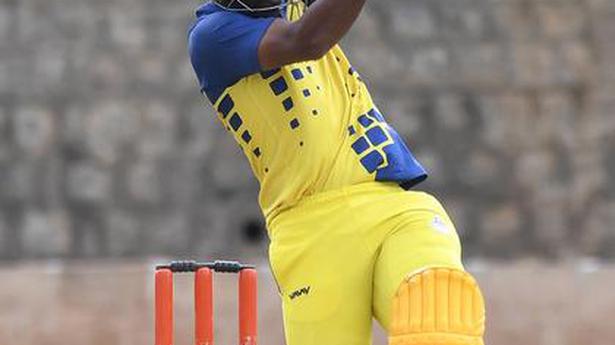 Rain had the final say in the last two quarterfinal outings of the Vijay Hazare Trophy held at Alur grounds here on Monday, handing Tamil Nadu and Chhattisgarh free passage to the semifinal.

The Mumbai-Chhattisgarh (Alur 2) and Tamil Nadu-Punjab (Alur 1) matches were abandoned after heavy showers hit for a second time in the day. As the chases were called off before the minimum 20-over mark required to bring the VJD method into play, the fixtures yielded no result.

Chhattisgarh and Tamil Nadu progressed to the last-four on the basis of them recording more group stage wins than their opponents.

The rule was harsh on Punjab, which had won five of eight matches in the tougher elite Group ‘B’, while Tamil Nadu had secured nine wins against weaker teams in the lower Group ‘C’.

“It’s a very bad rule. It doesn’t make any sense. If this is the criteria, then teams would prefer to play in Group ‘C’ or Group ‘D’ (Plate group).

“It would have been good to have a reserve day for knockout games. If it happens to rain on the reserve day too, then so be it. At least you’ve tried to get play,” a frustrated Punjab captain Mandeep Singh said.

Mandeep added that since Tamil Nadu had played one group game more than Punjab, his team would have been knocked out even if it had won all eight of its group games.

When informed about Mandeep’s grouse, BCCI General Manager (Cricket Operations) Saba Karim said, “The playing conditions were given to all teams before the tournament started, but is good to get feedback from the players. I can understand the frustration, but it is too late to change any rule now. We will, of course, discuss and address this issue.”

Mumbai, meanwhile, had little reason to complain about the rules.

The side had four group stage wins to Chhattisgarh’s five, and both teams had featured in Group ‘A’.

Chhattisgarh had defeated Mumbai in their group stage match.

However, had Mumbai batted for another 8.3 overs, it would have won via the VJD method. Set a revised target of 192 in 40 overs, Mumbai was cruising at 95 for no loss in 11.3 overs when rain intervened.

Yashasvi Jaiswal, who scored a double century earlier in the tournament, blasted a 38-ball 60, and had a solid Aditya Tare (31 n.o.) for company.

Punjab, whose innings was stopped only 7.4 overs short of the 20-over mark, was on course to a VJD method victory as well.

While Harpreet rescued his side from three for two, Aparajith took Tamil Nadu to a competitive total alongside Washington Sundar (35 n.o., 39b, 3×4).

In the semifinals to be held here on Wednesday, Chhattisgarh takes on Karnataka (at M. Chinnaswamy Stadium), and Tamil Nadu faces Gujarat (Just Cricket ground).

West Indies all-rounder Kieron Pollard has been fined 20% of his match fee and handed one demerit point for disobeying the umpire’s instructions during the second T20 International against India in Florida. The International Cricket Council said that Pollard’s conduct was in breach of Level One of the ICC Code of Conduct. Pollard was found […]

Pakistan is one great team which can beat itself comprehensively. Experts over the years have not been able to comprehend the reasons for the under-performance of this maverick team. Pakistan, perhaps, has its roots of self-inflicting woes from the inaugural Prudential World Cup league match in 1975 when it allowed the West Indies to recover […]