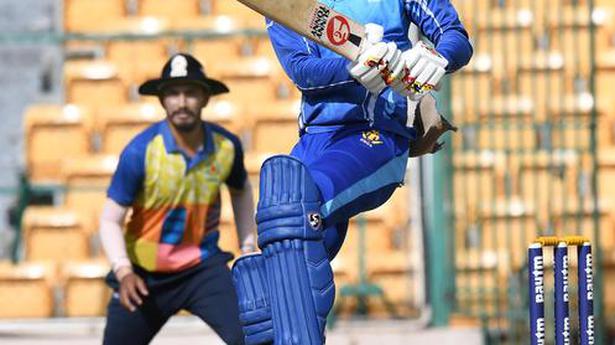 Karnataka stormed into the final of the Vijay Hazare Trophy with a nine-wicket victory over Chhattisgarh at M. Chinnaswamy Stadium here on Wednesday.

The 19-year-old threw away a chance to get a third List ‘A’ century, attempting to cut a straight delivery from left-arm spinner Ajay Mandal.

After Padikkal departed, it was the turn of Mayank Agarwal to join the action. Mayank (47 n.o., 33b, 3×4, 4×6), fresh from his successful run in the Indian Test side, brought the small crowd to their feet with three straight sixes — a result of pure timing.

The fourth maximum, just a short-arm jab, sailed far into the square-leg stands.

Rahul, meanwhile, was not at his best, preferring to take the safe route to form. He kept the ball on the ground, and kept the score moving with singles and twos.

The 27-year-old saved the best for last, finishing the match with an authoritative six off pacer Pankaj Rao.

The Chhattisgarh fielding, however, left a lot to be desired.

Captain Amandeep Khare put down a catch at point to give Rahul a life on 25, and a nervous Vishal Singh fluffed a simple run-out chance when Padikkal was on 68.

Earlier, after being put in, Chhattisgarh stumbled and was bowled out for 223. V. Koushik (four for 46) stood out with an outstanding spell of seam bowling. Koushik’s run-up may have looked short and harmless, but by getting the ball to move sharply both ways, he left the batsmen flummoxed.

This was best exemplified in the first over of the match, when after getting three deliveries to come in to Shashank Singh, he found the edge with a perfect outswinger.

Koushik, featuring in his maiden Hazare Trophy campaign, has had an interesting journey to the Karnataka side. Only a few years ago, he was employed with Amazon, and competed in various local corporate and private tournaments.

“After completing my engineering at Sri Venkateshwara College of Engineering here, I worked at Amazon for about 18 months. At the time, I played matches wherever I got the chance — be it corporate tournaments, State leagues, private leagues all over the city. I played purely for the passion,” Koushik said.

After a week’s break, Delhi resumes its Ranji Trophy campaign by hosting two-time defending champion Vidarbha at the Ferozeshah Kotla ground in a crucial tie beginning on Sunday. The return of Ishant Sharma and the inclusion of left-arm pacer Kulwant Khejrolia have strengthened the home team in conditions that could assist fast bowling. Vidarbha clearly […]

Yuzvendra Chahal says he can stay away from home for three years once the lockdown is lifted. “I will get lock-downed from my home, I will not come back to my home. I can’t take this anymore, can’t stay at home for longer now. These days of staying at home will suffice for the next […]