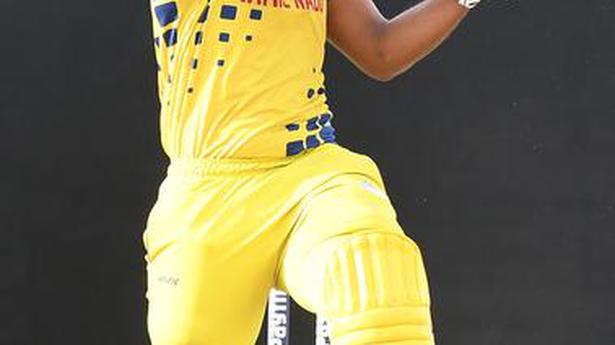 M. Shahrukh Khan produced a nerveless performance (56 n.o., 46b, 3×4, 3×6) to power Tamil Nadu into the final of the Vijay Hazare Trophy following a five-wicket win over Gujarat at the Just Cricket Ground here on Wednesday. In Friday’s summit clash, it will take on arch-rival Karnataka which hammered Chhattisgarh by nine wickets.

Chasing 178 in a rain-curtailed 40-over match, Tamil Nadu was in trouble at 96/5, with all of its batting mainstays back in the dressing room. But Shahrukh and southpaw Washington Sundar (27 n.o., 43b, 2×4) stitched together an 85-run stand to whizz past the finish line with an over to spare.

What stood out was Shahrukh’s awareness and composure on a wicket that wasn’t easy to bat on. Until the last few overs, the 24-year-old eschewed all extravagant shots and ensured his side would remain within touching distance. Gujarat skipper Parthiv Patel had held back an over each from his experienced spin pair of Piyush Chawla and Axar Patel to be used at the death.

With 36 needed from 5 overs, Parthiv made the move by introducing Chawla, only for Shahrukh to rock back and hoist the leggie’s third delivery over deep mid-wicket for a monstrous six. In the next over, a cheeky late cut to the boundary off Axar brought the equation down to 20 from 18 balls.

Two balls later, Shahrukh hit speedster Rush Kalaria straight back over his head for another maximum to turn the match decisively in Tamil Nadu’s favour, before he wrapped it up by sending paceman Jayveersinh Parmar soaring over deep mid-wicket.

“The time went in, the wicket had eased out a bit. So probably I was lucky,” said Shahrukh modestly. “Stalwarts in our team found it tough [early on]. So obviously it was a tough wicket. It wasn’t a comfortable match for us. We knew it would go down to the wire, but Washington reciprocated well. Finishing off a match like that is a good achievement [personally].”

Earlier in the morning, bolstered by the return of R. Ashwin, Tamil Nadu opted to bowl. Captain Dinesh Karthik introduced the offie as early as the fourth over and reaped rewards straight away as Ashwin drew Priyank Panchal out of his crease and had him stumped for 3.

This duo turns over a new leaf

In the World-conquering under-19 squad of India, one was the captain, and the other was his deputy. More than a decade down the line, the flamboyant Kohli has evolved into India’s most successful Test captain, while Ravindra Jadeja has emerged as a reliable allrounder across formats. It was fitting that when Kohli eclipsed a plethora […]

Acknowledging that his job is to “finetune” the players, India coach Ravi Shastri also stressed that the support staff played a huge part in the team’s success. “We all have roles. Our job is to finetune them (players) in every possible way because when you’re on the road, there could be little things that creep […]