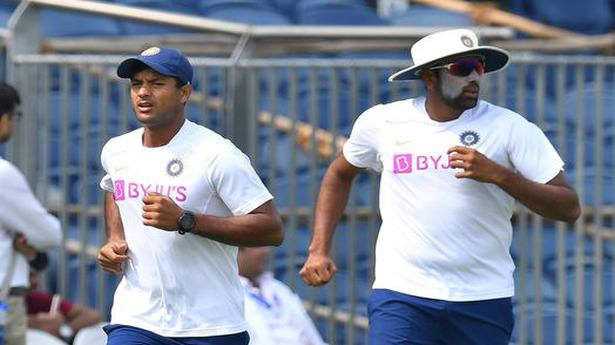 The arrival of Test cricketers R. Ashwin and Mayank Agarwal adds excitement to the Vijay Hazare Trophy semifinals, which will be held here on Wednesday.

Both Ashwin and Mayank are in good form, shining through in the recent home South Africa Test series. Ashwin finished with 15 wickets — the highest for the series — and Mayank underlined his international class with scores of 215 and 108.

Even without the inclusion of Ashwin and Mayank, Tamil Nadu and Karnataka would have started as favourites. Tamil Nadu handed Gujarat its only defeat in Group ‘C’, while a sparkling unbeaten 142 from skipper Manish Pandey powered Karnataka to a 79-run over Chhattisgarh in Group ‘A’.

In this high-stake knockout round, however, past results count for little. Gujarat captain Priyank Panchal, who alongside opening partner Parthiv Patel laid the platform for his team’s six-wicket win over Delhi in the quarterfinal on Sunday, said, “I am very much happy with the team’s performance. From the league stage to now, we have won 9 out of 10 matches. We’re looking forward to the semifinals, and hopefully we will make the final.”

The Tamil Nadu-Gujarat match, meanwhile, is likely to be affected by rain. Heavy rains have pounded the city in recent days and with more showers predicted, to go with inadequate drainage at Just Cricket ground, the outing could turn out to be a non-starter.

In the event of no result, Tamil Nadu will progress to the final on the basis of having registered one win more than Gujarat in the group stage.

Shamarh Brooks, after years of toil in the domestic circuit, made his Test debut earlier this year against India. The 31-year-old batsman, however, had a tough time, scoring just 63 runs in four innings, including a 50 in the second innings of the second Test in Kingston. Brooks, though, made amends here with a gritty […]

The West Indies, on Wednesday, named Monty Desai as its batting coach ahead of the limited-over series against India beginning here on Friday. Desai, who has been handed a two-year contract, has joined the team here before the the first T20I on Friday. He has held coaching roles with Afghanistan, Nepal, Canada, Indian regional teams […]

Mike Hesson may have finished second in the race for the job of India coach, but he isn’t fretting. If reports are to be believed, the New Zealander ran Ravi Shastri close before the latter was preferred by the CAC for his record as an international cricketer. Happy with process Hesson, who is here as […]