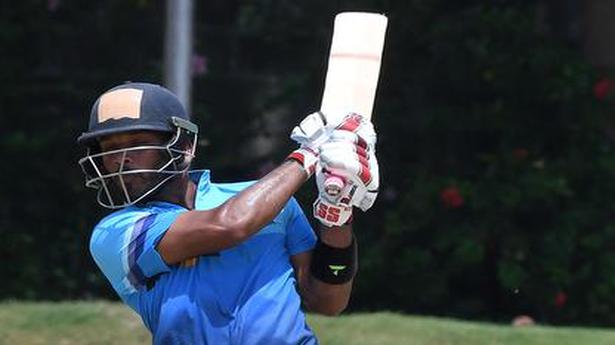 A hundred from Vishnu Vinod powered Kerala to a 65-run victory over Chhattisgarh in their Elite Group A clash in the Vijay Hazare Trophy here on Tuesday. Batting first at the Alur (3) grounds, Kerala made 296 for nine in 50 overs, with wicket-keeper Mohammed Azharuddeen contributing a half-century lower down the order. In response, Chhattisgarh was bowled out for 231 in 46 overs, with the Kerala pace bowlers in fine form. The victory was Kerala’s second of the tournament, taking the side to eight points.

Sandeep Warrier was excellent, taking three vital wickets to finish with three for 25, while M.D. Nidheesh (four for 54) and K.M. Asif (three for 50) also impressed. Chhattisgarh seemed well in the contest at one stage, with Jiwanjot Singh (56) and Ashutosh Singh (77) adding 105 runs for the second wicket. But Warrier got rid of both batsmen, while also accounting for captain Harpreet Singh Bhatia to trigger a collapse.

Storming off the blocks

Earlier, after Kerala had been put in to bat, Vishnu Vinod slammed his second century of the tournament — and his second List A ton overall. The opener scored a 91-ball-123, studded with five fours and 11 sixes. Vishnu stormed off the blocks, reaching his half-century off 31 deliveries as he and Sachin Baby added 93 runs for the third wicket. Vishnu carried on to raise his hundred off 71 balls, even as wickets fell at the other end.

Meanwhile, at the neighbouring Alur (2) ground, a century from 17-year-old Yashasvi Jaiswal helped Mumbai secure a massive 130-run win over Goa. Jaiswal made 113 — his first at senior level for Mumbai — as he and Aditya Tare (86) added 152 runs for the opening wicket. Siddhesh Lad, Shreyas Iyer, Suryakumar Yadav and Shivam Dube all came and exploded thereafter as Mumbai notched up a mammoth 362 for four in 50 overs.

At the Alur (1) ground, Jharkhand crushed Saurashtra by 130 runs, with Utkarsh Singh (100 and four for 34) turning in a fine all-round performance.

Despite the final stumble, a campaign to be proud of

The G was abuzz with a record turnout. While the Australian women saved their best for the last, their Indian counterparts wilted under big match pressure at the Melbourne Cricket Ground on Sunday. Despite the disappointing loss, captain Harmanpreet Kaur, head coach W.V. Raman and the touring entourage have every reason to hold their heads […]

Jonty Rhodes didn’t make the cut in the top three for the fielding coach’s post but Mark Ramprakash did when it came to the batting coach. While the No. 1 choice in all the categories was recommended for the post of the national men’s team’s support staff, the second- and third-ranked candidates would be considered […]

Sledging may have been Australia’s ‘gift’ to cricket, but the behaviour of players from India and Bangladesh during and after the ICC Under-19 World Cup final on Sunday has left a few India greats and administrators ‘shocked’. The West Indians never had to sledge. “That look, eyebrows raised, hands on hips, and a vicious bouncer […]