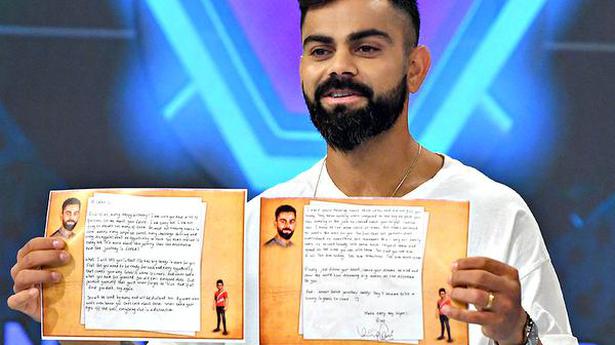 India cricket captain Virat Kohli will make his foray into the world of animation with StarPlus’ latest limited series Super V. The cricketer has lent his voice to the main character of the show.

Kohli announced the launch of the show at Star Studios in the city on Saturday, in the presence of Aakriti Sharma, who plays Kulfi on the show, Kulfi Kumar Bajewala. The eight-part show is centred around a young Kohli who learns a family secret one night in a dream, in which he is a superhero and has a mission to accomplish. The show focuses on how he balances life as a young cricketer, along with being a superhero.

“My childhood is somewhat similar to the one as the main character in the series. It wasn’t exactly like the one shown on the show since there is a proper storyline and a sequence of events,” Kohli said. “Each episode has a great message and I have lots of good memories with my family and friends, regarding cricket.”

Kohli said he wasn’t completely sold on the idea of the show at first. He agreed when he saw it. “The fact that the show is not just entertainment but also gives the viewer some kind of clarity is something that is important to me. It’s a form of motivation,” he added.

The ticket sales for the India-West Indies T20 cricket match, to be held at the Sports Hub on December 8, will begin on Nov. 25. The tickets will be available only on KCA’s ticketing partner site Paytm. The link will be soon made available on KCA’s website. The prices of the tickets are ₹1000 for […]

Australia has the edge, India the momentum

India Women will have to overcome big-match pressure as it aims to exorcise the ghosts of the past in the T20 World Cup final against Australia in front of a record crowd at the Melbourne Cricket Ground here on Sunday. Group topper India goes into the final unbeaten after topping the group stage where it […]

Former India captain and coach Anil Kumble has supported Virat Kohli’s view of having five centres for Test matches in order to bring the spectators back to the stadium. Kumble, in fact, wants the BCCI to go back to the old tradition of the 80s and 90s where Test matches at specific centres were held […]