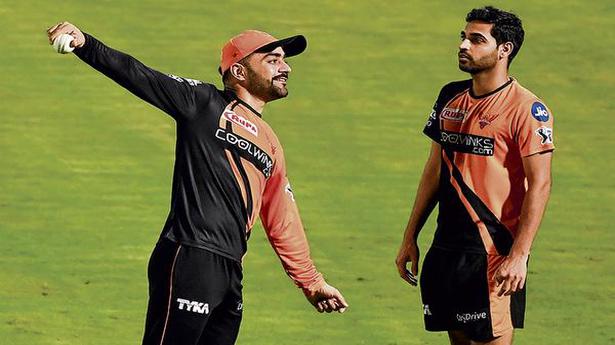 The mood in the city is upbeat, as the IPL is finally here after a gap and Vizagites are keen to see a tightly fought contest between Sunrisers Hyderabad and Delhi Capital on Wednesday.

The Delhi Capital led by Shreyas Iyer has a young star studded side players like Shikhar Dhawan, Prithvi Shaw, Rishabh Pant, Ishant Sharma and Kasigo Rabada, were seen practising at the ACA VDCA Cricket Stadium in the evening, cricket buffs turned out in large numbers to see their stars.

Late in the evening, it was the turn of the Sunrisers Hyderabad for their practice session. Though SRH looks a depleted side with both J. Bairstow and David Warner back to their respective countries, Vizagites are hopeful that New Zealand players like Kane Williamson and Martin Guptil and Rashid Khan (Afghanistan) and India’s young turk Vijay Shankar will give Delhi a tough fight.

“We are all SRH fans and we are sure that SRH will make it to the final,” said Nayeem Khan, an engineering student.

But the icing on the cake will be CSK (Chennai Super Kings) coming to Vizag to play a match on May 10.

“For CSK to come to Vizag, it has to lose the match against Mumbai Indians on Tuesday. Though we do not like Dhoni losing a match, but we are selfish, as we want Mahi (Dhoni) here to light up the field with his sixes,” said Roshini, an MBA student.

Visakhapatnam was allotted two IPL matches, one eliminator and one qualifier, to be played on May 8 and 10. The stadium earlier hosted IPL matches in 2012 when franchise Deccan Chargers chose this stadium as its second home.

Later, matches were shifted to Vizag in 2015 and 2016, due to Telangana agitation and water issues in Maharashtra.

The biggest star of this stadium is Mahendra Singh Dhoni, as this is where he was discovered, said Rajesh a cricket enthusiast.

This is the ground where scored his first ODI century when he smashed a swashbuckling 148 against Pakistan in 2005, and also the ground where he hit three sixes and one four in the last over for Rising Pune Supergiants in 2016.

Meanwhile, fans were seen searching for DC and SRH jerseys and flags at sport shops.A group of hawkers from Kolkata, who move from one venue to another selling jerseys say that the demand of SRH is more over DC.

Meanwhile, counters opened to redeem tickets bought online saw heavy rush. A few complained that the authorities concerned could have allowed the online bookings for entry, as it is done in cinema halls.

Mumbai edges through on NRR

Defending champion Mumbai sneaked into the Vijay Hazare Trophy quarterfinals, pipping Uttar Pradesh (UP) on Net Run Rate. The two sides, both of whom had suffered two washouts, were tied on 20 points but UP had the edge with a match in hand. It however couldn’t capitalise, losing its final fixture on Thursday against Haryana […]

A battling 77 not out from Rory Burns on Saturday gave England a fighting chance of improbable success as they need 255 more runs for victory in the first Test against South Africa at Centurion Park. Set an imposing 376 runs to win the first of the four-match series, England reached 121 for one wicket […]

India’s men’s team skipper Virat Kohli congratulated the Harmanpreet Kaur-led women’s side for reaching its maiden final of the T20 World Cup in Australia, saying the outfit’s performance is something to be “proud” of. The Indian women’s team advanced to the the summit clash owing to a superior group stage record, after the semifinal clash […]