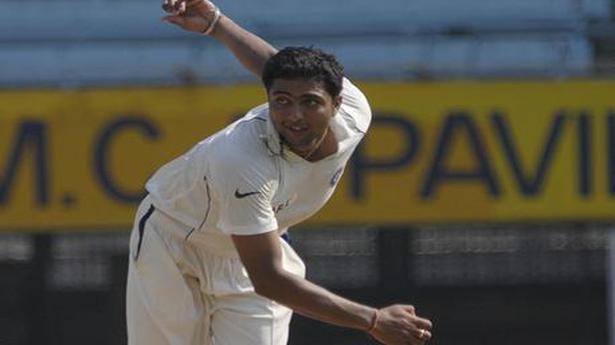 Vikram Raj Vir Singh, popularly known as VRV, on Wednesday decided to bow out of the game. Bogged by a lower back injury that wrecked his career, VRV conveyed his decision to the Board and Punjab Cricket Association (PCA).

“I am grateful to the BCCI and the PCA for giving me the opportunity to represent the State and the country. I enjoyed my journey and could have done much better had the back injury not troubled me for so long,” said VRV from Chandigarh.

A fast bowler who made his Test debut against the West Indies at St. John’s in June 2006, VRV ended his career in May 2007 at Chattogram (Chittagong). His five-Test career brought him eight wickets. Incidentally, VRV played in West Indies, South Africa and Bangladesh apart from two ODIs in India against England.

VRV Singh, in what was to be his farewell match, claimed five for 43 against Jammu & Kashmir in the Ranji Trophy quarterfinal at Vadodra in January, 2014. He aggravated his back injury and finally decided to bow out to explore a career in coaching.

In the opinion of Harbhajan Singh, “VRV was a talented bowler. He had pace and the ability to bowl long spells. He ought to have achieved much more as a Test cricketer.” His tally of 121 wickets in 29 First Class matches hardly does justice to his potential.

VRV conceded, “I can’t blame anyone. I tried my best to overcome my injury setback. I worked hard on my fitness but somehow the injury refused to heal. I consider myself fortunate to have played for India and shared the dressing room with some of the greatest names in the game.”

Looking ahead, VRV said, “I want to be involved with the game as a coach. I have learnt lessons which I would like to share with the youngsters.”

Australia’s unprecedented home Test series defeat to India in 2018-19 served as a “wake-up call” for Justin Langer, who reckons the series will prove as the defining moment of his coaching career. Langer was appointed Australia coach in May 2018, following the infamous ball-tampering scandal that saw skipper Steve Smith and his deputy David Warner […]

U-19 World Cup | Tyagi powers Men in Blue into semifinals

Pacer Kartik Tyagi blew away the Australian top-order with a sensational spell to power India into the semifinals of the ICC U-19 World Cup with a comfortable 74-run win here on Tuesday. Tyagi’s four wickets came after India recovered through Atharva Ankolekar’s combative half-century to reach 233 for nine, a modest total which the holder […]