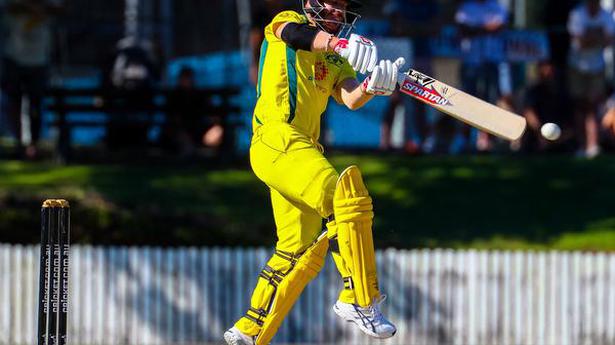 David Warner smashed an encouraging 39 (43, 6×4, 1×6) with the bat and Steve Smith (22, 43b) took a brilliant catch in the field as the pair savoured a victorious return to the Australia fold in a World Cup warm-up against a New Zealand XI on Monday.

Wearing Australian colours for the first time since the ball-tampering scandal in March, 2018, Smith and Warner were greeted warmly by a small crowd in Brisbane, where Aaron Finch’s team took a one-wicket win. Finch top-scored for the host with 52.

Warner’s knock, coupled with Usman Khawaja’s cheap dismissal for four, is likely to fuel the debate as to Australia’s ideal opening partnership for its title defence in England.

Former skipper Smith was less assured with the bat but made an early impression in the field when he dived for a superb one-handed catch to remove Tom Latham.

Set 216 for victory after bowling New Zealand out in 46.1 overs, Australia’s tail-enders held their nerve to close out the win.

Pace spearhead Mitchell Starc and all-rounder Glenn Maxwell were rested for the first of the three unofficial warm-ups against New Zealand.

Not had enough [game] time this year, says Umesh

This has been a difficult IPL season for Umesh Yadav. Last year, the Vidarbha pacer was RCB’s principal weapon in the powerplay overs, finishing the campaign as the side’s highest wicket-taker, with 20 scalps in 14 matches at an economy rate of 7.86. This time around, his numbers make for tough reading. Umesh has eight […]

Prithvi Shaw’s hopes of making an India suffered a major dent as it was confirmed that the Mumbai opener has a labral tear in his left shoulder after injuring himself in the field during the opening day’s play. As a result, the BCCI medical team has asked Shaw, in contention for the reserve opener slot […]

Virat Kohli won the toss at Edgbaston and decided to bat first against Bangladesh. India made two changes, leaving out Kedar Jadhav and Yuzvendra Chahal and bringing in Dinesh Karthik and Bhuvneshwar Kumar. Bangladesh made two changes as well, bringing in Sabbir Rahman and Rubel Hossain for Mahmudullah and Mehidy Hassan. (If you are viewing […]