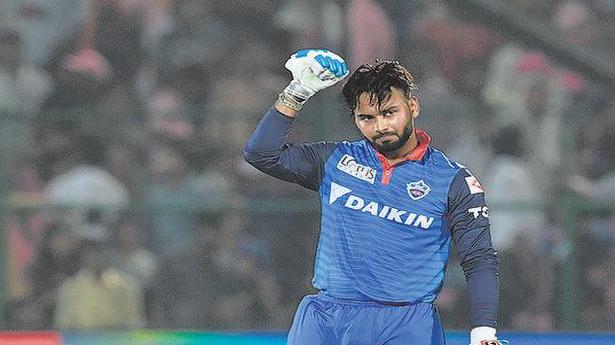 Rishabh Pant’s omission from India’s World Cup squad has been one of the major talking points for a week. On Monday night, the explosive left-handed batsman showed why.

His unbeaten 78 off 36 balls against Rajasthan Royals underlined his value as a match-winner and finisher. Though he had made an identical score in Delhi Capitals’ first match this IPL against Mumbai Indians, he had scores of 23, 7 and 6 in his last three games.

The vintage Pant is back, however. After guiding his team to what was its fifth win from six away games, he said thoughts of selection for India’s World Cup team were on his mind.

“I won’t lie, the thought was running on my mind,” Pant said. “It feels lovely having helped my team win a crucial match. And that is really important.”

His teammate Prithvi Shaw paid glowing tributes to him. “He is the biggest finisher in T20 right now, especially for our team,” the opener said.

“Our bowlers also did very well to restrict Royals in the last seven overs. Otherwise the total could have even gone up to 220.”

Shaw said the team was confident of chasing down the target of 192. “The boundaries are huge here and we felt Shikhar Dhawan or I had to take chances in the PowerPlay,” he said. “And he played really well.”

Royals’ Sanju Samson also said Dhawan’s innings was crucial. “He is in good form and took the PowerPlay from us,” he said. “Then Pant finished the job.”

He admitted it would be tough for Royals to qualify for the playoffs now. “We have to win all our five games,” he said.

“And we have to look at the results of the other teams as well.”

Fever rules Dhoni out of IPL game against Mumbai Indians

Chennai Super Kings skipper Mahendra Singh Dhoni was on Friday ruled out of their IPL game against Mumbai Indians owing to fever, the franchise said. The twice World Cup-winning captain is missing a CSK match only for the second time since 2010. “Thala (Dhoni) missing out a game for the second time this season, this […]

How Azharuddin opened up a new chapter for Tendulkar

Mohammad Azharuddin and Sachin Tendulkar shared a special bond when it came to scripting some of the most memorable moments in Indian cricket history. On March 27, 1994, at Auckland in New Zealand, skipper Azhar, in consultation with manager Ajit Wadekar, promoted Tendulkar to open the innings for the first time. And the rest is […]

India blown away by ‘Typhoon’ Turner

Seldom does a team score in excess of 350 in 50 overs and knows well that it missed out on adding another 20-30 runs! As captain, Virat Kohli was in an unenviable position for the better part of the contest after the team posted an imposing 358 for nine. But the way, Man-of-the-Match Ashton Turner […]