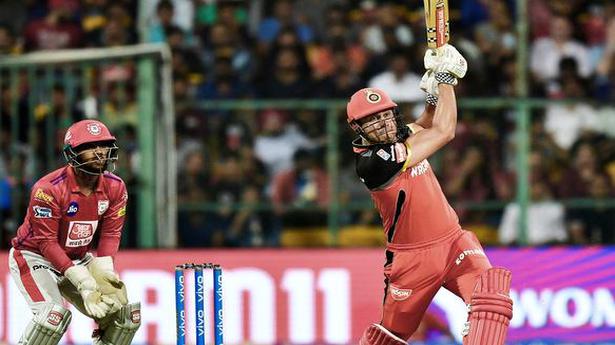 Following a fourth win in five matches, including three on the trot, the Royal Challengers Bangalore faithful may still nurse hopes, however faint, of a spot in the playoffs. But all-rounder Marcus Stoinis didn’t want to look that far ahead.

“I hope we don’t change [the thinking],” the Aussie said after the latest victory over Kings XI Punjab on Wednesday.

“We’re fortunate we are not in a position where we can think too far ahead anyways. I don’t know what the equations are, but we can’t do much now apart from just win the games.

“We now go to Delhi, and if we win that we cross the next bridge. So you just go, express yourself, and have fun.”

The key, Stoinis said, was that the side no longer seemed shackled by the baggage it collected over six straight defeats at the start of the season.

“When you lose a couple of games, you try and play not to lose rather than play to win,” he said. “It takes certain individuals to turn that around and we’ve had a few guys stand up, who’ve made runs and taken wickets in big situations. We’ve started winning some close games as well which has given everyone confidence.”

The 29-year-old can count himself among those who have helped effect the change. Against King’s XI, he proved the ideal foil to A.B. de Villiers’ manic hitting, before coming to the party himself by smashing 20 runs off the final four balls of the innings.

“The plan was to put the ego away a little bit,” he said, about curbing his natural instincts.

“If you’ve got a plan and you are doing it for the team, you have to trust it. Fortunately AB was at the other end and we knew that once we were in and seen a few balls, we could capitalise.”

R. Ashwin, the losing captain, felt it was yet another instance of his side failing to close out a tight contest. The defeat — fourth in five matches

‘Wonder of the Cricketing World’: Wishes pour in for Dhoni on 38th birthday

Cricketers past and present, apart from the legions of his fans from all walks of life, wished Mahendra Singh Dhoni on his 38th birthday, drowning the recent wave of criticism around the veteran’s approach to batting. Dhoni, who turned a year older on Sunday, shook a leg with daughter Ziva in the presence of wife […]

The South Africans have their task cut out in the upcoming Test series against India. The home team has three fine spinners in Ravindra Jadeja, R. Ashwin and Kuldeep Yadav, and the conditions are more than likely to assist them. Aiden Markram has done his best to prepare well for these challenges. He and his […]

M.S. Dhoni sporting an Army insignia on his glove during the India-South Africa clash was well appreciated by his fans but the International Cricket Council on Thursday requested the BCCI to have the badge removed, saying it is against regulations. Claire Furlong, ICC general manager – strategic communications, said, “It is against the regulations and […]