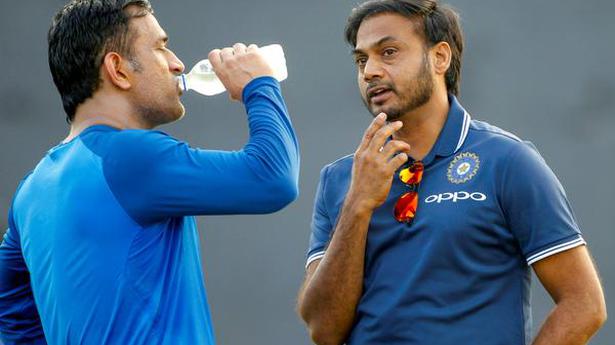 The writing had been on the wall even before M.S. Dhoni failed to help India clear the World Cup semifinal hurdle but for the first time, chief selector M.S.K. Prasad admitted that the selection panel had “moved on” from Dhoni, backing Rishabh Pant as India’s wicketkeeper for shorter formats.

“I have been very clear on this that after the World Cup we have started backing Rishabh Pant. So we will still back him (Pant) and see that he progresses well. Of course, he might not have the best of the matches, the way we except of him, but we can still only make a player by backing somebody. So we are confident that he will come out successful and that’s been the thought process post World Cup and we are focusing on Rishabh Pant,” Prasad said after announcing the squad for India’s forthcoming series versus Bangladesh.

When pressed further on whether the selectors had moved on from Dhoni, Prasad said: “I made it very clear, post World Cup that we are moving on. We are giving opportunities to youngsters and see that they establish themselves in the side. With Rishabh doing so well and Sanju Samson coming into the side, I am sure, you must be understanding our thought process.”

It is perceived that Dhoni may not feature in India’s squad now on but the retirement announced could be delayed since he is contemplating to wear the Chennai Super Kings’ yellows for the 2020 Indian Premier League. Prasad, though, remained non-committal on whether Dhoni has conveyed his willingness to let youngsters take over.

Haryana was 192/3 at the end of the 19th over and was on course for a formidable total after being asked to bat first against Karnataka in the Syed Mushtaq Ali Trophy here. What followed was something unprecedented and has happened only once before in the history of T20 cricket. Abhimanyu Mithun, who till then […]

In a move which would also indirectly convey a clear message that there would be no IPL this season, Hyderabad Cricket Association secretary R. Vijayanand, in a letter to the Telangana Chief Minister K. Chandrasekhara Rao on Wednesday, offered to let the Rajiv Gandhi Stadium for setting up isolation centre for the coronavirus-affected patients. Right […]