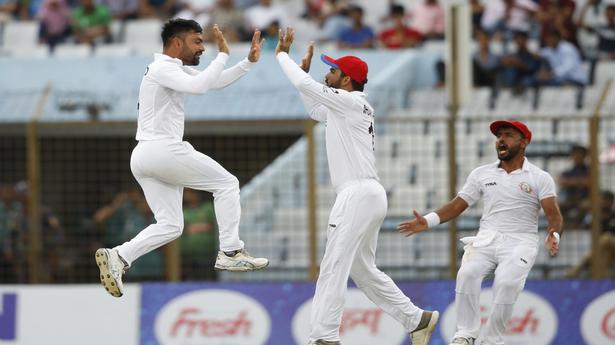 Forget the back story, cynical sports editors would repeat in the old days, judge a team purely by its performance on the field. Were the players good enough to score runs, good enough to take wickets and hold catches? Did they score at least one run more than their opponents at the end of the match? That’s all that matters. Don’t romanticise origin stories. If someone had to walk barefoot to school and began by throwing stones at distant objects, that is interesting but not crucial to a team’s success.

Yet, sports without romance is incomplete. In fact, sport is romance. Scores and results are important, of course, but they aren’t everything. Often the struggle, and the sheer improbability of a group playing together is the more interesting aspect of the competition. And when romance meets performance, the joy is complete. Afghanistan’s elevation to the highest reaches of cricket is perhaps the most romantic story in contemporary sport.

They imbibed the game in refugee camps while their country was at war. They have no real tradition in the game like the other members of the Commonwealth. A quarter century ago they had fewer than 30 people who played cricket.

Their players have been shot, their first national hero, Mohammad Nabi, was on a cricket tour when his father was kidnapped back home. Nabi, 34, has spent half his life in refugee camps. He announced his retirement from Test cricket before the start of his country’s third Test which they won this week in Bangladesh. A gifted off spin bowler and a hard-hitting batsman, Nabi, a gentle, articulate man, is unique in other ways too. He is the only player to hit the first ball he faced in both innings on his First Class debut for six.

As Rashid Khan picked up his eleventh wicket of the match to bring Afghanistan victory — their second in three Tests to match the early record of Australia — he took off in the manner of the modern bowler, running across the field. Then he collected himself, and found he was closer to the dressing room than his teammates. At this moment, Rashid, 20, the youngest Test captain ever, chose to wait till senior man Nabi caught up, and gestured for him to lead the team in. It was a wonderful gesture, a tribute to both men and testimony to how much more Afghanistan had learnt about the game beyond batting and bowling.

Rashid Khan is already their best-known player, their richest, and easily their finest bowler. In three Tests he already has 20 wickets, five-plus in his last three innings. Afghanistan lost their debut match against India, but beat Ireland and the more experienced Bangladesh. But the format of the new World Test championship, where only nine of 12 teams earn points, means they might not play as much Test cricket as they deserve to.

Rashid apart, the team’s Test hero is Rahmat Shah, who made his country’s first century, after having made 98 and 76 in the earlier win against Ireland. He is 26. Afghanistan players graduate from the Under-19 levels to the A team, like their counterparts in other countries. “The game is becoming increasingly structured,” wrote Tim Wigmore in Second XI : Cricket in Its Outposts, adding, “There are 80 grounds in Afghanistan, and more than 50 turf wickets.”

All this sounds perfectly normal till you realise just what it means for a country to have achieved it despite having been at war since 1979 when the Soviets moved in. Hillary Clinton put it in perspective when she said, “If we are searching for a model of how to meet tough international challenges with skill, dedication and teamwork, we need only to look to the Afghan national cricket team.”

It is possible that Afghanistan has emerged as everybody’s second favourite team after their own.

So much for the romance. What of the performance on the field of play? In ODI, they have played 123, won 59 and lost 60; in T20 it is 49 won versus 22 lost in 71 matches. There is something about white ball cricket that seems to suit their approach which favours risk-taking over safety-first, and lays greater store by the unorthodox. That they made the switch to Test cricket without too much trouble is merely one more astounding fact about a team that deals in astounding facts.

The early wins mean Afghanistan ask to be judged on their game rather than on history and the past. At some point in the evolution of teams in sport, the focus shifts from what was considered improbable to what is seen as possible. This usually takes time.

Afghanistan, despite their poor showing in this year’s World Cup, have earned the right to be treated as an international team without condescension. And that has been their greatest achievement in a decade of international cricket.

Keeping wickets and batting up front is a lot more work, but India’s K.L. Rahul on Friday said he “is loving” the additional responsibility as it is bringing the best out of him. Rahul scored 56 off 27 balls, his 99-run partnership with Virat Kohli setting up India’s chase. Rahul kept wickets full-time first during […]

Mohammad Nabi to retire from Test cricket after Bangladesh match

Former Afghanistan captain Mohammad Nabi has announced his decision to retire from Test cricket after the ongoing one-off match against Bangladesh. The 34-year-old seasoned all-rounder, who has featured in three Test matches for Afghanistan, including the landmark maiden game against India last year, will continue to play white-ball cricket. He wants the country’s youngsters to […]