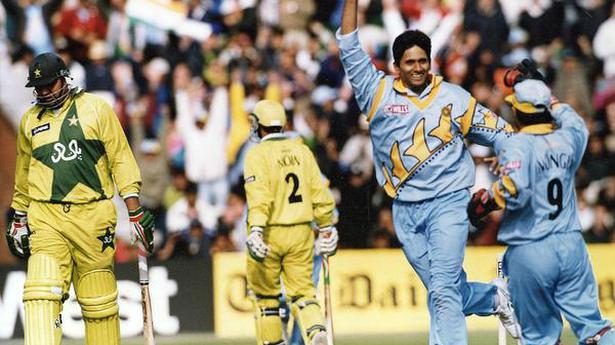 The last time the World Cup was held in England, 20 years ago, the tournament was returning there after 16 years. The Cup was coming home, said the hosts, with the suggestion that cricket itself was coming home. But the World Cup, and indeed the cricket that was returning was a different beast from the one that had left England. The shift to the subcontinent as the power centre of the game was complete.

Sri Lanka had won the previous Cup, and here Pakistan were in the final; four years later, India were finalists. The continental shift was accompanied by enhanced team performances.

Asian crowds brought a unique flavour to the matches. They were exuberant, they celebrated, they ran on to the field at the end of the game, dancing when their teams won and screaming at the players when they lost. Cricket had changed, fandom had changed. English authorities didn’t know what to make of all this. In the final, Pakistani supporters unable to get tickets celebrated outside Lord’s, many of them packed into buildings nearby.

This was a World Cup where the Asian fans were saying the game belonged to them too. It was entirely appropriate — after all, the tournament was being marketed as the “Carnival of Cricket.” And there is nothing more depressing than a silent, unengaged carnival.

At Trent Bridge, where India played New Zealand, authorities decided that the carnival had to be controlled and announced over the tannoy that fans ought to “reduce the excessive amounts of noise”. They were soundly jeered for their efforts. We play differently, we celebrate differently, said a spectator who didn’t care about the Tebbit Test — he would support India regardless of which country had issued his passport.

England’s attempts at reclaiming the sport were doomed to failure, and not just because cricket had been taken to their bosom by a population thousands of kilometres away. It was too late already to return to that mythical legend of unspoilt days where everything was green and wonderful. As the new millennium waited in the wings, so too did the story that was to dominate: match-fixing.

Some of us who reported the World Cup in England recalled later how an Indian player or two sometimes borrowed our mobile phones for a “local call.” Was it an innocent request, or a way of throwing authorities off the scent, we wondered when the Hansie Cronje confessions endorsed the rumours and whispers. This was the World Cup where the Indian media too became a force; at Lord’s during the final, we had a press box to ourselves, and even then there was a spillover.

But essentially this was a marketing World Cup. Indian brands advertised in stadiums. Already non-cricket centres like Toronto had proved the venue didn’t matter for advertisers since television made all the difference. Soon Indian incense sticks and textiles and more made their appearance at venues around the world where India were playing.

It was the World Cup of the Super Six, with 12 teams in two groups .

The top three in each group proceeded to the Super Six, carrying with them the points they had earned in the first stage against the other two teams. This caused the Australia-West Indies match to be manipulated. Needing just 111 to win, Australia took 41 overs to get there ensuring the West Indies would make the cut on net run rate — ahead of New Zealand, who had beaten Australia and would thus have carried two points into the Super Six.

Skipper Brian Lara denied any collusion, but there was no need for a written contract. Both he and his counterpart Steve Waugh knew exactly what to do in the greater interest of their respective teams.

How do teams face each other when their countries are at war? The Kargil conflict was the talk as India prepared to take on Pakistan at Old Trafford. I was interviewed by a BBC man who kept asking if this was an England-Australia type of rivalry. He would have been happy had I said ‘Yes’, but this was clearly more than that, especially at that point in history. Yet, as common sense and practicality dictated, both sets of players treated this as just another cricket match — hard enough to do at the best of times.

The interesting statistics came off the field where three fans were arrested and nine ejected from the ground. This was remarkable given all the flag-waving, slogan-shouting, drum-beating, cat-calling and whistle-blowing through the match.

For long the Australia-South Africa semifinal was seen as the finest ODI ever. The tie, after South Africa needed one run in four balls to win was as exciting as it was foolish. Lance Klusener and Allan Donald played out a hilarious pantomime twice, now running, now stopping and finally watching as Donald was run out. South Africa, among the favourites every time, are yet to redeem themselves.

CoA meeting: playoffs to be finalised

Finalising venues for the IPL playoffs along with decision to float fresh tenders for various sponsorship and services will be finalised at the Committee of Administrators (CoA) meeting here on Monday. The meeting will also be attended by three office-bearers — acting president C.K. Khanna, acting-secretary Amitabh Choudhary and treasurer Anirudh Chaudhry. The issue of […]

Coronavirus | We will talk about IPL later: Rohit Sharma

Sport is of least priority in these troubled times, feels India batsman Rohit Sharma, who wants to talk about IPL only after normalcy returns. Rohit, who has been out of action for last two months due to calf muscle injury was due for a comeback in the Indian Premier League, which has been postponed till […]

‘It will change the mood of the country’ Source: thehindu.com Related