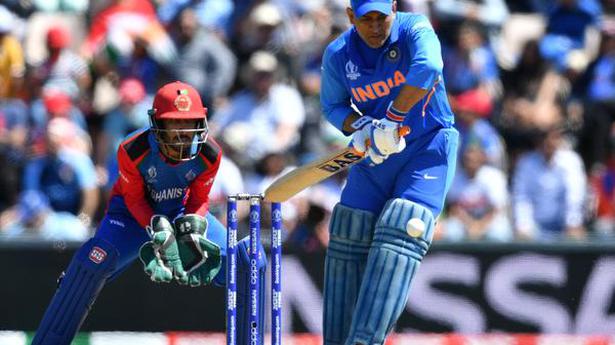 Among players with tattoos and the odd designer stubble, M.S. Dhoni is the original rebel. The man, who hoisted the 2011 World Cup winning six, loved riding his super-bikes, nursed a fascination for the army and was often difficult to trace on the phone.

He has always defied the odds and it is time for him to do that yet again. The former India captain, playing his last World Cup — he will turn 38 on July 7, is facing a few whispers about his relevance as a batsman. Against Afghanistan on Saturday, Dhoni strode out to a thundering applause. But during his dogged tenure where the accent was on defence while coping with wily spinners upon a sluggish pitch, restlessness coursed through the stands at Southampton’s Hampshire Bowl.

Dhoni scored 28 off 52 balls and his 53.84 strike-rate jarred with the audience. A section booed even when he departed after giving a futile charge to leg-spinner Rashid Khan. Dhoni had starred in an innings-reviving 57-run fifth-wicket partnership with Kedar Jadhav but the excessive dot-balls consumed was deemed a failure.

Even Sachin Tendulkar, usually guarded in his words, spoke about the need for positive intent on the part of Dhoni and Jadhav. It is not that Dhoni has lost his touch but he is judged by his own exalted standards and his latest show was juxtaposed with the fact that the opposition was Afghanistan.

At the crease, he looks secure, blocking well, weighing the conditions, tapping the ball to the deep for a leisurely single, nudging it close and sprinting at break-neck speed or striking the odd four. Where he has slipped is in the conversion rate in which a patient knock acquires its concluding kinetic burst. Biding his time and then launching those mammoth sixes, has been Dhoni’s patented act. He does the first part but it is the decisive second and final instalment that has been erratic.

Dhoni is still vital to the squad and in the latest World Cup, he dished out a searing cameo (a 14-ball 27) against Australia and a measured 34 off 46 deliveries in the opening joust involving South Africa. Perhaps the fault lies with him being branded as a forever aggressive batsman. Cricketers evolve and may be this is a Dhoni with shades of Rahul Dravid, a builder of match-defining partnerships and the guiding light to the lower order.

Plus there is a Hardik Pandya following him to launch those mighty hoicks. And there is Rohit Sharma and Virat Kohli above him to set a frenetic base. If Dhoni the batsman is being subjected to scrutiny, there is no questioning his work with the wicketkeeping gloves despite the odd lukewarm day. His stumpings have always been streaks of lightning that blind the batsman.

But more than the roles he plays before and behind the timber, it is his big brother act with Kohli and the rest, that remains an intangible which can never be evaluated unlike runs scored, catches taken and stumpings effected. There is no number to altruism and chutzpah.

When Mohammad Nabi threatened to seal the contest in Afghanistan’s favour, Dhoni was in the thick of things, finessing field placements, being a constant voice in Kohli’s ear and at one stage he even asked his skipper to move a shade wider in the outfield. Kohli complied without a murmur and later hat-trick hero Mohammed Shami thanked Dhoni for his valuable advice that shaped those last over dismissals.

As India gears up for its final set of league games, Dhoni has to reveal his entire cricketing repertoire. Perhaps he will turn the clock back as a batsman and the emotional Indian fans should respect an icon inching towards his twilight.

Vijay Hazare Trophy: Rayudu sets it up for Hyderabad

Karnataka slumped to a 21-run loss against Hyderabad in the Vijay Hazare Trophy at the Alur Grounds here on Tuesday. Chasing a modest 198, the home side turned in a below par batting performance, with only Devdutt Padikkal (60, 104b, 6×4) and skipper Manish Pandey (48, 54b, 5×4, 2×6) looking the part. For Hyderabad, captain […]

The doubting thomases “should be careful” about what they wish for as there is no second coming for a once-in-a-generation player like Mahendra Singh Dhoni if people “push him into retirement”, former England captain Nasser Hussain said on Saturday. Hussain, one of the most respected voices in world cricket feels that the soon-to-be 39 year […]

Ageing Tigers are roaring in this season’s IPL

It is only April, but it would be safe to say that one of the greatest sporting stories of 2019 has already unfolded at Augusta in the United States. Surely, Tiger Woods winning the Masters, at the age of 43, will take some beating. A few hours before the golfing legend’s extraordinary feat at the […]