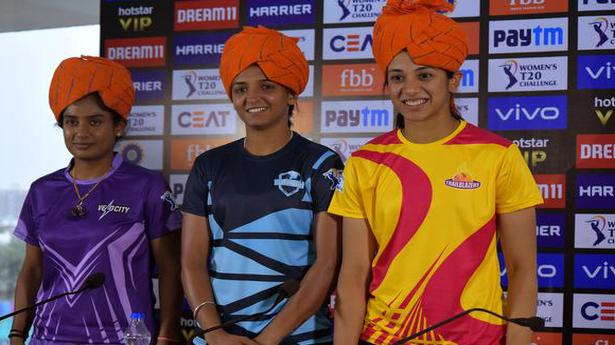 Wearing the traditional Rajasthani headgear safa, the three women smiled into the cameras a bit self-consciously.

Mithali Raj, Harmanpreet Kaur and Smriti Mandhana may not have quite expected to be capped like that by the Rajasthan Cricket Association ahead of the BCCI’s Women’s T20 Challenge series, which opens here on Monday. That was after the three captains — easily among the world’s biggest stars in women’s cricket — spoke how much the four-game tournament meant for them and their sport.

Mithali, the highest scorer in international women’s cricket and skipper of Velocity, said the series was a vast improvement from last year, when there was just one game. “It is a step ahead,” she said. “We have to begin with small steps. Maybe this could be a full-fledged league year.”

She added it was important for the players to perform well and make people come and watch the games. “Then it could encourage the BCCI or the franchises to come forward to start a proper league,” Mithali said.

“This offers an opportunity for our young players in domestic cricket to interact with some of the best in the world,” she said. “When you get at least two games, you could field several youngsters, who could benefit from competing with overseas players.”

Smriti, captain of Trailblazers, nodded in agreement. “It is also an ideal opportunity for seniors like us to play against our own younger players,” said the ICC’s No. 1 batter in the women’s game. “With the T20 World Cup just 10 months away, we could find out which players would perform well under pressure.”

Harmanpreet, Supernovas’ skipper and one of the world’s most destructive batters in women’s cricket, said she was pleased with the venue. “It has improved a lot since we last played here four or five years ago,” she said. “The wicket looked good for T20 cricket; we have seen teams making good scores in the IPL.”

Some of the finest

Apart from all the big names from Indian cricket, the series will also feature some of the finest players from the rest of the world. Stars from England, New Zealand, Sri Lanka, West Indies and Bangladesh are here for the tournament, which concludes on May 11.

Missing from the action though will be the Australian women. They are not in the teams because of a dispute between the BCCI and Cricket Australia, over a men’s ODI series, ironically enough.

“It is unfortunate that the Australian girls are not playing here,” said Mithali. “We would have loved to have them in this tournament.”

Batting long is the key: Sharath

Batting for long periods is an art. Here the protagonist shuts everything from his mind and focusses on the next ball. It’s a routine he repeats until he constructs a monument. Take Sarfaraz Khan’s epic unbeaten 301 against Uttar Pradesh recently. The innings shed light on concentration, game awareness and skill. Sridharan Sharath, former Tamil […]

Ball should be made for the conditions, not vice versa: Dilip Jajodia

After much reluctance, India will finally play its first-ever day/night Test at the Eden Gardens against Bangladesh later this month. But more than the cricketers, all eyes will be on the SG pink ball that will be used for the very first time. Keeping a keen eye will be Dilip Jajodia, the India-born owner of […]

Rajasthan, thanks to opener Manender Singh’s impressive century and handy contribution from southpaw Mahipal Lomror, scored a nine-wicket win over Hyderabad on the third day of the four-day Ranji Trophy Elite Group match at the Rajiv Gandhi Stadium here on Wednesday. Earlier, resuming at 101 for six, Hyderabad was bowled out for 156. Even this […]