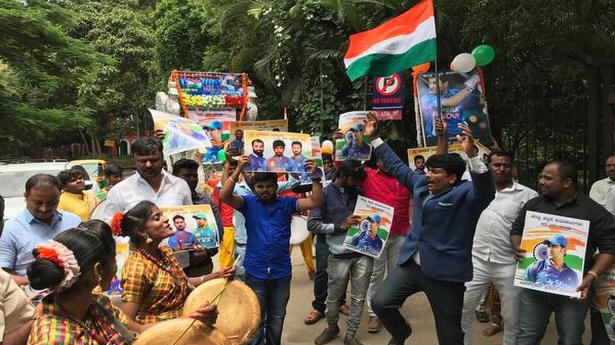 Cricketers past and present, apart from the legions of his fans from all walks of life, wished Mahendra Singh Dhoni on his 38th birthday, drowning the recent wave of criticism around the veteran’s approach to batting.

Dhoni, who turned a year older on Sunday, shook a leg with daughter Ziva in the presence of wife Sakshi as his teammates, in his preferred minimalist manner, celebrated the reverential figure’s birthday.

“7 continents in the World 7 days in a week 7 colours in a rainbow 7 basic musical notes 7 chakras in a human being 7 pheras in a marriage 7 wonders of the world 7th day of 7th month – Birthday of a wonder of the cricketing world #HappyBirthdayDhoni. May God Bless You!” Sehwag tweeted.

Sakshi uploaded pictures from inside the celebrations, which show Dhoni’s face smeared with cake. In another post, Dhoni can be seen cutting three cakes with Ziva while the others surround him.

Rishabh Pant, with whom also Dhoni danced, tweeted, “Happy birthday mahi bhai. Thank u for always being there as a mentor as a brother as a friend. Have more success in life always.”

All-rounder Kedar Jadhav wrote, “Happy birthday @msdhoni (mahibhai) words are not enough to express my love for u wish u all the success and happiness and health in life God bless u always.”

Off-spinner Ashwin Ravichandran said, “Here is wishing one of the best in the business @msdhoni a very very happy birthday.”

There were many former players who wished the man, who led India to three ICC world titles besides taking them to the top of the Test ranking for the first time.

Mohammad Kaif said, “First played together in Bangladesh in 2004 & shortly saw him announce his arrival against Pak at Vizag when he scored 148, hasn’t looked back since and the legend of MS Dhoni has only grown by the year. Wishing a once in a lifetime player and captain,#HappyBirthdayDhoni.”

Wriddhiman Saha wrote on his handle, “Can you recognise us? Happy Birthday @msdhoni bhai! May you have a wonderful year ahead!”

R P Singh said, “Serving Indian cricket since so many years and still looking as fit as ever! Happy birthday brother @msdhoni best wishes for your well-being.”

Referring to his abilities as a finisher, ex-India opener Aakash Chopra said, “If ever there’s a book on cricket, the finishing chapter will be written by Dhoni.”

The ICC on Saturday posted a video celebrating Dhoni’s achievements on the eve of his birthday, applauding the World Cup winning captain for changing “the face of Indian cricket”.

Continuing his splendid form, Ganesh Satish scored his 14th First Class century and third of the season to enable Vidarbha set a target of 347 for Delhi in their Ranji Trophy match at the Ferozeshah Kotla ground here. Ahead by 16 runs on the first innings, Vidarbha launched a calculated assault on Delhi’s Ishant Sharma-less […]

Pacer Abhimanyu Mithun entered in the record books on Friday after he snared five wickets, including a hat-trick, in one over for Karnataka during the semifinals of the Syed Mushtaq Ali Trophy against Haryana. Mithun, who finished with figures of 5/39, did not have a great day with the ball until the last over as […]

IPL 2019 | MI vs RCB: Jolted Mumbai will be wary of Royal Challengers

When Mumbai Indians travelled to Bengaluru in the first week of IPL-12, the clash between outfits led by Virat Kohli and Rohit Sharma lived up to its billing. However, the thrilling finish was overshadowed by the no-ball controversy. The fans in Mumbai will hope that quality — and not controversy — trickles down to the […]