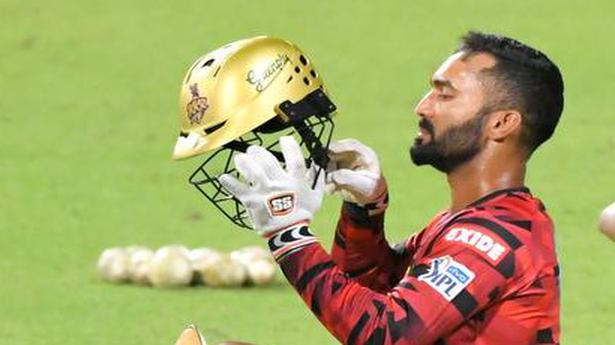 Kolkata Knight Riders captain Dinesh Karthik, who has been picked in India’s World Cup squad, feels workload management in the Indian Premier League is about managing oneself on the field than off it.

Ahead of KKR’s home match against Royal Challengers Bangalore here, Karthik said skipping matches in the IPL was not the solution.

“I don’t think you should leave it at the hands of the players to pick and choose matches. It’s not the match that’s the problem because if you take a fast bowler he bowls four overs. A batter on most days will bat 25-30 balls and field.

The wicketkeeper-batsman said the selection of the World Cup squad ended an anxiety. “Now that the team has been picked, the focus is back on IPL. I think everything is back on track,” said Karthik.

Steve Smith put Australia in a strong position in the first Ashes test at Edgbaston on Sunday, with his unbeaten 98 steering his side to 231-4, a lead of 141 over England, at lunch on day four. Resuming on 124-3, Smith continued to put England to the sword, passing 50 in the fourth over of […]